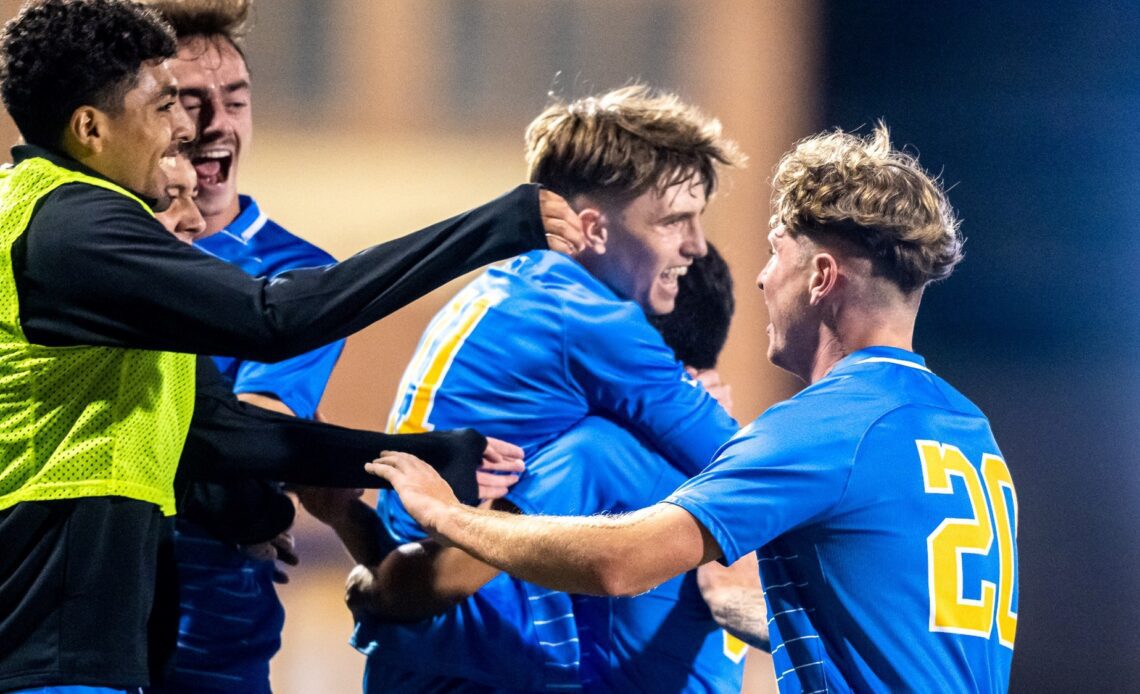 
LOS ANGELES – Behind goals from forwards Jose Contell and Kevin Diaz, the UCLA men’s soccer team overcame an early deficit to post a 2-1 win over California Baptist on Thursday evening in an NCAA Tournament First Round game at Wallis Annenberg Stadium.

Thursday’s game had a strangely-similar script to UCLA’s first-round game from the 2021 season against UC Santa Barabara. In both contests, the Bruins conceded first but equalized via Contell and received a game-winning goal from Diaz.

Freshman keeper Sam Joseph made four saves for the Bruins in his collegiate debut, including a number of key stops in the second half.

Cal Baptist (10-7-4) opened the scoring in its first-ever NCAA Tournament game, as Luis Mueller collected the rebound of his own blocked and shot and went five-hole to sneak it past Joseph for an early lead in the seventh minute.

The Bruins needed just 78 seconds to knot the score back up, with Contell finding the back of the net at the 8:01 mark.

The goal-scoring play got started with a run through the middle from junior forward Andre Ochoa, who laid off a ball down the left side for junior defender Tommy Silva. From there, Silva took a touch and whipped in a ball. Contell met the ball right at the edge of the six-yard box, and deftly re-directed it off a bounce past the CBU keeper for the equalizer.

Jose Contell ties this game right back up, finishing off a ball from Tommy Silva.

The two teams would play to a stalemate for the next 60 or so minutes, but Diaz broke through for UCLA in the 69th to provide the game-winner.

Solid passing and ball movement set up that chance for the Bruins, with freshmen Cam Wilkerson and Thomas Raimbault playing a 1-2 to get the former loose just above the box. While trying to advance into the 18, Wilkerson had a 50-50 ball get popped loose and it went over to Diaz on the left side of the box,…