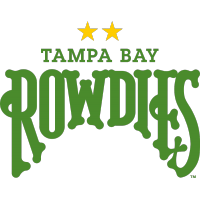 ST. PETERSBURG, Fla – Today, the Tampa Bay Rowdies announced that the club has re-signed forward Lucky Mkosana, bringing the veteran back for a seventh season in Tampa Bay. The deal is pending league and federation approval.

The fan-favorite attacker surpassed 100 matches played for the Rowdies and now ranks sixth for the club in modern-era appearances with 105 matches played across all competitions.

“It’s hard to put into words what it means to play for the Rowdies,” said Mkosana. “For me, coming in for my seventh year, we still need that third star and that’s something still to play for. The connection with the community, the fans, and how family-oriented it is. Everyone is together and you get that atmosphere when you’re playing that everyone is really here to support you. There’s nothing that compares to playing here at Al Lang.”

A native of Zimbabwe, Mkosana first came to the Rowdies as a loanee in 2013. He signed as a permanent player the following year, finishing his two-year stint with four total goals. The Rowdies re-acquired Mkosana through a transfer from Louisville City FC midway through the 2019 season.

The 35-year-old’s offensive output since his return has been stellar. While being utilized primarily as an option off the bench, Mkosana has notched 18 goals in 1,8000 minutes of league play for the Rowdies over the last four seasons. Mkosana has scored 23 goals in 86 appearances as a substitute during his USL Championship, the most of any individual player. E tallied 16 of those goals from the bench for Tampa Bay.

“At times I didn’t give Lucky the opportunity he deserved last year based on how he trained,” said Rowdies Head Coach Neill Collins. “He trained fantastically and hardly missed a day. Age is just a number. He can still make an impact on and off the field. I don’t think there’s anyone better at impacting the game off the bench. He showed that when the chances come, he invariably puts them in the net. Just getting those chances is a big part of his game. We’re delighted to have him back. With more turnover than we’ve had in the past, it’s important to have guys that show the players coming in what the standards are and what it means to play for this club.”

The Rowdies are set to kick off their 34-match campaign at home on Saturday, March 11 versus Indy Eleven. View the full schedule here. Single-game tickets will go on sale to the public in…