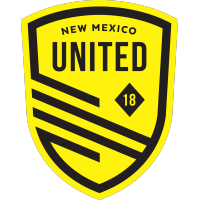 New Mexico United and the Albuquerque Dukes are thrilled to announce the launch of an exciting merchandise collaboration between the two organizations, in celebration of the 50th anniversary of the original creation of the Dukes logo by Dick Moots – bringing together the two iconic New Mexican brands to allow fans to truly show oFf their pride in the Land of Enchantment. The collaboration logos are created by Forty7th Studios.

A black baseball jersey featuring United’s “Somos Unidos,” and a collab-logo between the two brands. (Available at Dukes Store)

A white soccer jersey featuring the Dukes’ famous script logo across the front, and an artistic representation of the Sandia Mountains across the bottom. (Available at United Store)

A two-sided soccer scarf featuring an updated Dukes logo in United’s black & yellow on one side, and “Somos Unidos” in the Dukes’ red & yellow on the other. (Available at Both Stores)

The gear will launch in-store at United’s location, and the Dukes’ location – both in Nob Hill – on Black Friday. Doors open at 9:00 AM. Specific gear will be available at each location.