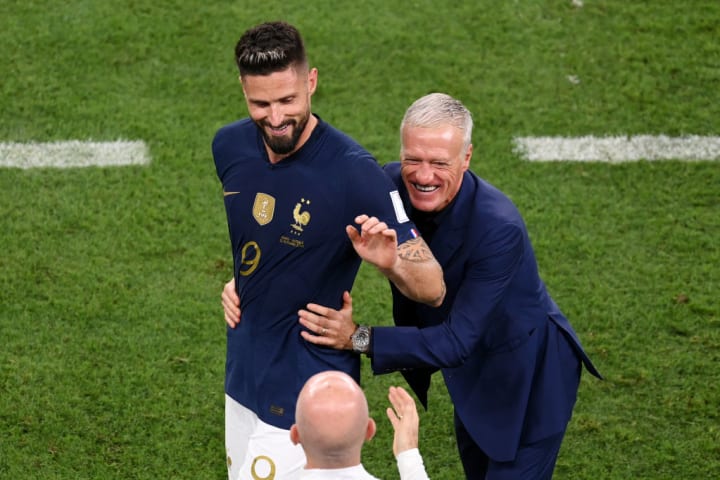 France had to come from a goal down to beat Australia in their opening World Cup group stage match.

Didier Deschamps’ world champions fell behind early on but rallied back with a superb team performance.

The Aussies took a shock lead after just nine minutes after Harry Souttar’s cross-field ball was met by Matthew Leckie, who cut inside Lucas Hernandez and crossed for Craig Goodwin to fire into the roof of the net.

Australia went close to doubling their advantage soon after when Theo Hernandez – on for his injured brother – surrendered possession too easily to Mitchell Duke, whose strike flittered narrowly wide of the post.

However, France found a leveller with 27 minutes on the clock when a cleared corner fell to Hernandez, and his cross was headed home by Adrien Rabiot from mere yards out.

The champions went in front not long after having won the ball back high up the pitch, with Nathaniel Atkinson robbed by Kylian Mbappe and Rabiot. The latter then selflessly squared for Olivier Giroud to tap into an empty net.

After recovering from their early setback, France were beginning to play their way through Australia. Mbappe was continuing to run rings round Atkinson and Antoine Griezmann fired wide from 20 yards.

Mbappe somehow volleyed a cross from Griezmann over the top from six yards out on the stroke of half-time, before Jackson Irvine headed against the post in stoppage time.

Just after the break, Giroud came close with an acrobatic overhead kick which licked the paint of Mat Ryan’s upright.

A last-ditch challenge from Kye Rowles kept Mbappe from getting on the scoresheet after a lovely one-two with Giroud, and Griezmann had a shot from 18 yards cleared off the line by Aziz Behich.

Mbappe at last got on the scoresheet midway through the second half when he leapt high to nod in a cleverly chipped cross from Ousmane Dembele.

Giroud then tied Thierry Henry’s record as France’s all-time scorer with a header of his own from an Mbappe cross in the minutes that followed Les Bleus’ third.

Ibrahima Konate forced Ryan into a flying save with his first touch of the ball, with the former Brighton stopper flying across his line to deny the header Hernandez had a header of his own kept out seconds later.

It was a proud night for Giroud / Stu Forster/GettyImages