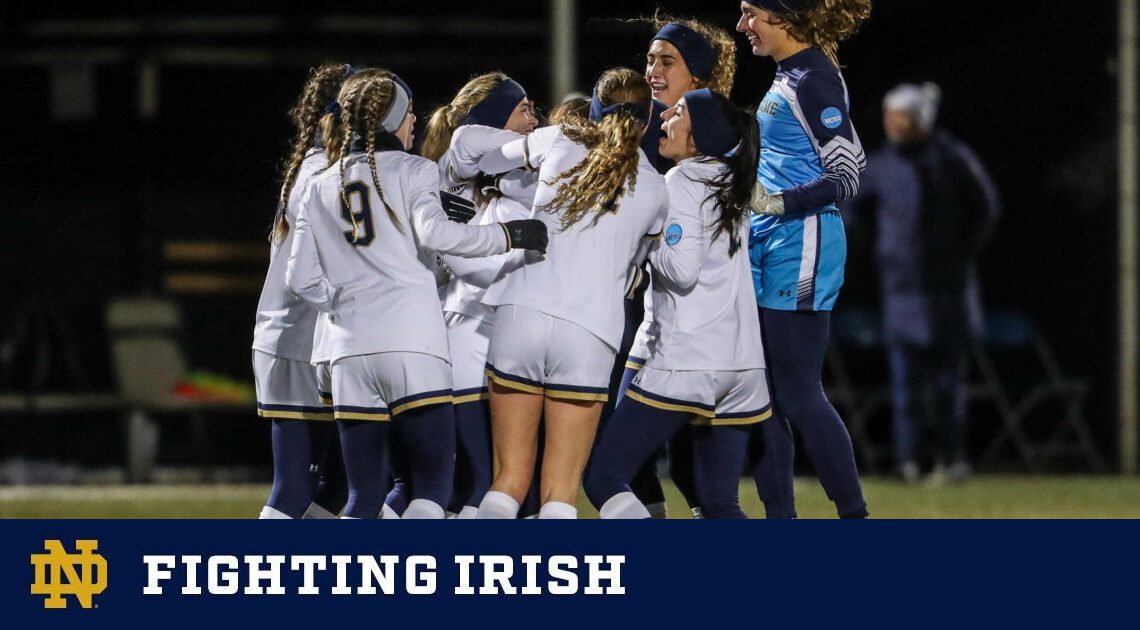 Notre Dame remains unbeaten over its last 12 matches, outscoring its opposition 33-6 in said stretch. Furthemore, the Irish have outscored its NCAA Tournament opponents 11-0 through three rounds.

It was grad student Olivia Wingate, who secured the game-winner, scored in the 20th minute. It marked Wingate’s third of the NCAA Tournament, tying Korbin Albert, and 14th overall on the season. Senior Kiki Van Zanten notched the assist, her fourth of the year.

The Irish then added a second half goal in the 65th minute courtesy of senior Maddie Mercado. Senior Waniya Hudson earned her second assist of the season on a throw-in to Mercado who hit an absolute rocket just inside the far post from distance.

Notre Dame is now 50-3-1 at home all-time in the NCAA Tournament and 11-1-2 inside Alumni this season. The Irish earned one last ride in Alumni next weekend when No. 2 seed North Carolina comes to South Bend for the Elite Eight.

Wingate had some near chances in the opening minutes and finally got her goal in the 20th minute thanks to Van Zanten. Van Zanten stripped a TCU player on the left flank and pushed it ahead to Wingate, who found space to rip a shot near post from just inside the box.

TCU had just one shot on frame in the first half but it was a dangerous one, as Mackenzie Wood made a spectacular jumping save in the 29th minute.

Neither team really threatened to score in the final 15 minutes of the opening half, as the Irish took a 1-0 lead into the intermission. Notre Dame outshot TCU 10-2 in the half, but just 3-1 in shots on goal.

Both Maddie Mercado and Albert had shots that barely missed within 30 seconds of each other in the 52nd minute. After that, TCU produced three near goal-scoring opportunities. Yet, whether it was defensive grit by the Irish, or luck of the Irish when one shot hit the post, Notre Dame kept the Horned Frogs off the scoreboard.

Fast forward to the 65th minute and Maddie Mercado doubled the Notre Dame lead. Off a Waniya Hudson throw-in, Mercado turned toward goal and delivered a left-footed rocket into the far corner of the goal from outside the box.

Graduate and Granger, Indiana, native Mackenzie Wood and the Notre Dame backline saw the match out with little…