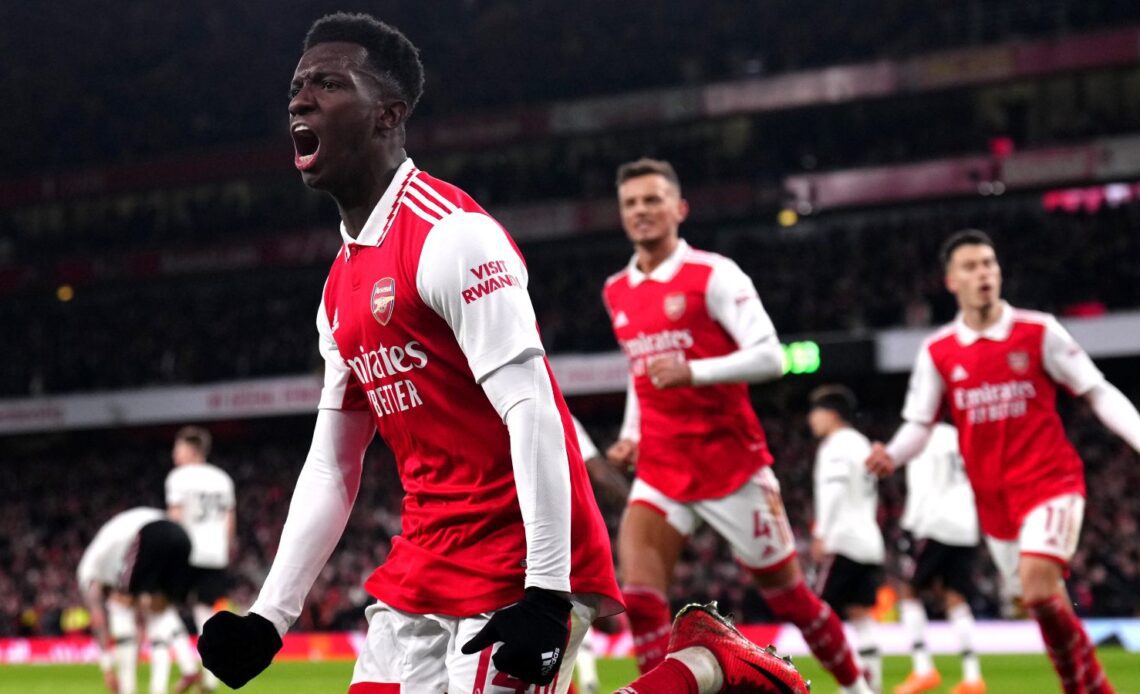 Eddie Nketiah scored a 90th minute winner in a thrilling game between Arsenal and Man Utd as the Londoners restored their five point lead at the top.

The striker has now scored seven goals in as many games since Gabriel Jesus suffered his knee injury.

Marcus Rashford netted in superb fashion to give United a 1-0 lead but this goal was cancelled out by Nketiah before Bukayo Saka’s top-drawer finish had Arsenal in front.

Lisandro Martinez, an Arsenal target last summer, then levelled for United following some poor defending but Nketiah would turn home a wayward Martin Odegaard shot to secure a memorable win.

Having seen an eight-point lead at the summit cut to just two following back-to-back victories for Manchester City since Arsenal’s win at Tottenham, Mikel Arteta’s side delivered when the pressure was on.

United are the only side to beat the Gunners in the Premier League this season and made a good start in their bid to repeat September’s Old Trafford win.

They had an early penalty shout turned down as Bruno Fernandes was challenged by Aaron Ramsdale, the VAR’s swift check backing up referee Anthony Taylor’s call to wave away appeals, but were nevertheless celebrating the lead in the 17th minute.

Thomas Partey uncharacteristically lost possession cheaply before Rashford skipped past him and arrowed in a fine low finish.

Arsenal, showing the sort of response of any side with title ambitions, bounced back soon after as Nketiah nodded home a Granit Xhaka cross after losing Aaron Wan-Bissaka far too easily.

The game opened up from that point, Scott McTominay – in for the suspended Casemiro – forced a smart stop out of Ramsdale with a strike from the edge of the box.

Arteta was booked by referee Taylor following his protestations at a Luke Shaw foul on Saka as the first half ended with the sides locked level.

That would change just eight minutes after the restart as Saka, afforded too much space and time, curled home an inch-perfect strike from 25 yards to put Arsenal ahead.

Ramsdale put in a man-of-the-match display in the 2-0 win at Spurs last week and made a great save to deny Rashford levelling with a deflected effort.

The England goalkeeper, however, was culpable for United’s equaliser after a mix up with half-time substitute Takehiro Tomiyasu at a corner allowed Martinez to head in his first Red Devils goal.

Having shared four goals, both teams went in search of the winner as Saka struck from a similar position only for this…