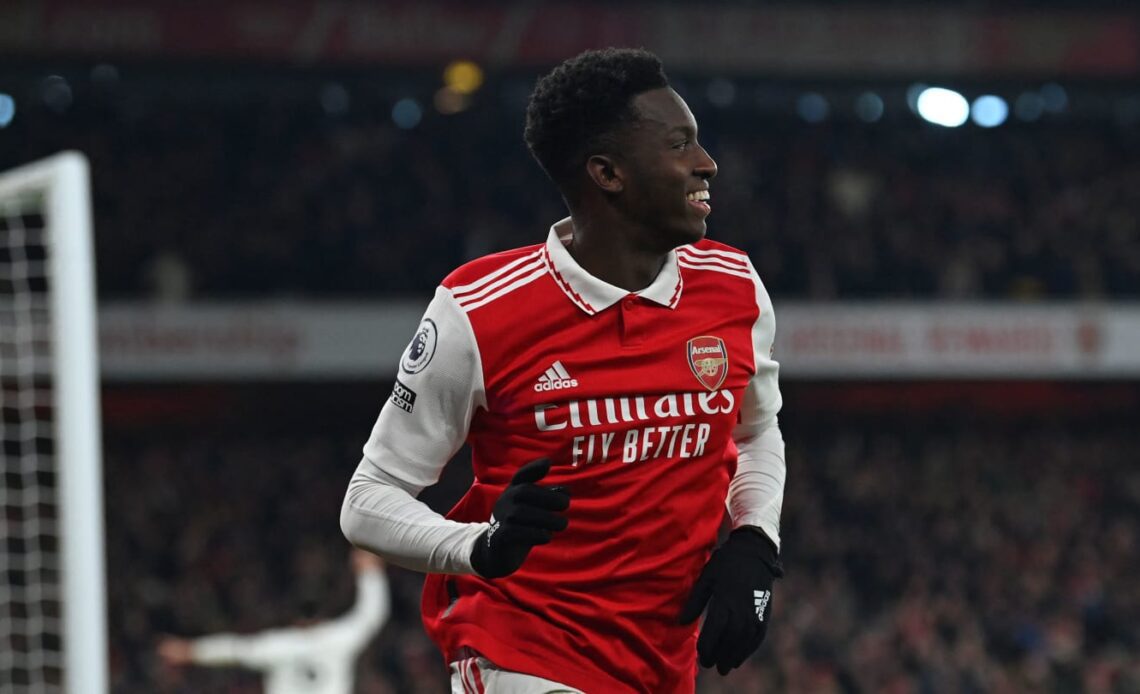 A late goal from Eddie Nketiah gave Arsenal three points that took them a step closer to the Premier League title in a thriller with Manchester United.

Arsenal made the stronger start of the two sides with Martin Odegaard having an early effort blocked before Gabriel Martinelli curled over from inside the box.

They continued to dominate for the opening 15 minutes but it was the away side that took the lead when Marcus Rashford received the ball well outside the box, jinked past Thomas Partey and fired past Aaron Ramsdale from range.

Erik ten Hag’s side wasn’t in front for long though with Nketiah equalising just seven minutes later, powering in a header from close range to finish off an excellent team move.

It was an end-to-end game after that with the teams dividing possession evenly and testing their respective defences, but both backlines held firm, preventing any major chances from being created.

Nketiah had one at the very end of the first half, unable to get on the end of a cross-cum-shot from Oleksandr Zinchenko, but neither team could have any complaints about going into the break level.

Both teams picked up where they left off at the start of the second half, adopting a high tempo and pushing for a goal, with Arsenal looking slightly more likely to take the lead.

They did just that in the 53rd minute when Bukayo Saka cut inside onto his left foot and fired an effort into the far corner from outside the box, getting his seventh goal of the season.

Rashford then almost made it 2-2 immediately but had his powerful effort inside the penalty area well saved by Ramsdale. A few minutes later though, the keeper undid his good work, fumbling a corner onto the head of Lisandro Martinez who took full advantage to level things up.

Arsenal had opportunities to take the lead again as the game passed the hour mark but a combination of poor finishing and good defending stopped them from doing so, much to the frustration of an extremely animated Mikel Arteta on the touchline.

The league leaders dominated possession as the game entered its closing stages, pushing their opponents further and further back, but the visitors remained a threat on the counter.

Nketiah had a huge opportunity to get his second and his team’s third with six minutes of normal time left when a loose ball from a free-kick fell perfectly to him, but he was denied by an excellent save from David de Gea.

The forward made amends soon afterwards though, tapping in a shot from Odegaard in the…