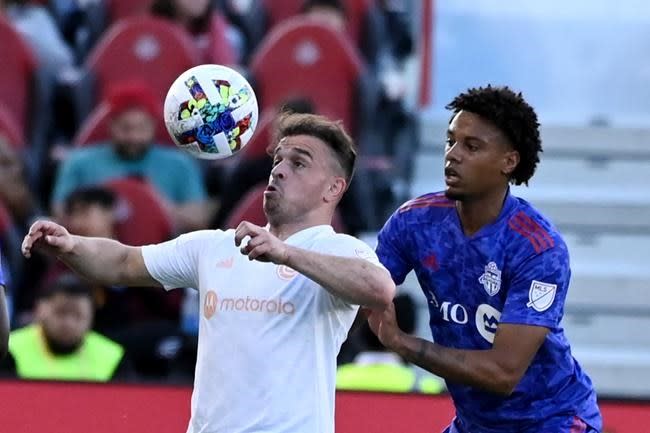 CHICAGO — The job of rebuilding Toronto FC continues for coach Bob Bradley. And on nights like Wednesday, the to-do list grows.

Toronto dug an early hole at Soldier Field, conceding two goals to Colombian teenager Jhon Duran in the first 16 minutes, and was unable to get out of it as the Chicago Fire won 2-0.

Toronto, whose defence has been suspect all season, could not handle Duran’s pace and power. And it failed to muster much offence.

“Tonight we never gave ourselves a chance,” said Bradley.

The veteran coach acknowledged that the repair job on TFC’s roster is still underway. More than 20 players have exited since the end of last season and the influx of new faces continues.

“There was a lot that needed to be done just to get rid of some guys,” he said bluntly. “Now that we’re at this point, there are areas where we’ve got to find ways to see if we secure ourselves. There’s also then just trying to get more from the guys you have.”

Bradley returned to that theme.

“We’ve had a lot of games this year where you would look around and say, ‘Yeah, maybe on the night we didn’t quite have enough quality.’ But … on an away game against a team that’s just lost (3-2 to Columbus) after being ahead by two goals, tonight we didn’t have enough guys tonight that really were ready for all parts of the game from the beginning.”

Toronto had 57.8 per cent possession and had five corners to Chicago’s two but was outshot 12-5 (6-2 in shots on target).

TFC defender Chris Mavinga was second-best to the Colombian youth international on both of his goals and didn’t last the first half. Fellow centre backs Shane O’Neill and Lukas MacNaughton, who replaced Mavinga, were both yellow-carded in the first half for trying to illegally slow down Duran.

Duran was 17 when he signed with Chicago in January 2021, becoming the youngest international player signing in MLS history. He spent the 2021 season with Colombia’s Envigado FC before his contract with the Fire officially kicked in.

With Mexican centre back Carlos Salcedo released from his contract Monday by mutual agreement, Toronto is short at centre back. With Mavinga having an up-and-down season, help is sorely needed.

“It’s an area where we’re pretty thin, no doubt about that,” said Bradley.

Mavinga took to social media after the game “to say sorry for tonight.”