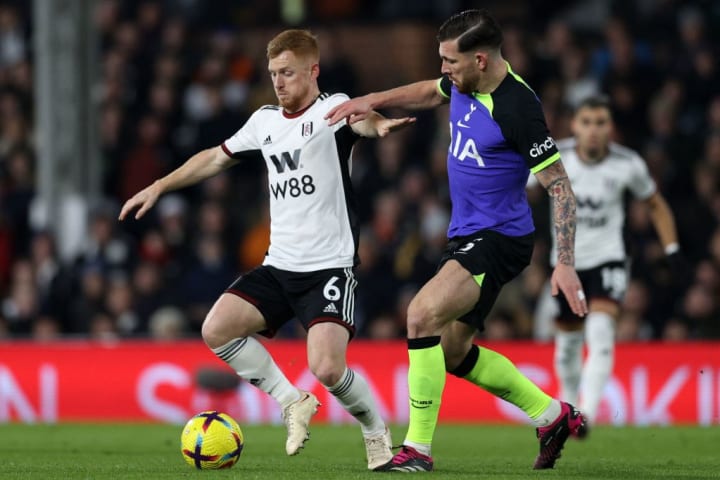 Harry Kane moved level with Jimmy Greaves at the top of Tottenham’s scoring charts with a moment of magic to secure a 1-0 victory over Fulham on Monday.

Kick-off was delayed by a transport issue but was then pushed back a little further when the officials got out on the pitch and realised their headsets weren’t connected, but the game did finally get underway.

It nearly got off to a screamer of a start as well as Eric Dier leathered a clearance from the centre circle which gave Bernd Leno a real scare as the ball landed on the top of the Fulham goalkeeper’s net.

Joao Palhinha and Harrison Reed pressed excellently in midfield and consistently won the ball back high, causing Spurs all sorts of problems in the opening stages. Reed could have scored 20 minutes in as he sent a volley towards goal but his effort was straight at a very grateful Hugo Lloris.

The hosts dominated the opening half an hour but Spurs slowly grew into the game in the dying embers of the first half, and Kane dragged himself level with Greaves as the club’s all-time top scorer with a glorious finish from the edge of the box to give Spurs an unlikely lead at the interval.

Kane nearly doubled his tally early in the second half but could only direct his header straight at Leno when he really should have found the back of the net.

Fulham enjoyed a lot of possession in the second half but weren’t allowed to bring the ball into dangerous areas, with Spurs’ impressive defensive shape ensuring they never really looked like losing their lead.

A long-range strike from Manor Solomon, which looked to be going wide anyway, did cause Lloris a problem late in the game but that was about as good as it got for the hosts, who were kept at arms length by Antonio Conte’s side until the full-time whistle.

GK: Bernd Leno – 6/10 – Wasn’t massively busy but could do nothing to stop Kane’s glorious goal. Made an impressive save to stop the Spurs striker early in the second half.

RB: Kenny Tete – 6/10 – Great energy down the right side and stopped Son from finding his groove during the game.

CB: Issa Diop – 7/10 – Another impressive performance from Diop, who won the battle against Kane all the way until the striker’s glorious goal.

CB: Tim Ream – 6/10 – Generally solid but got his positioning wrong for Kane’s opener.

LB: Antonee Robinson – 6/10 – Flew up and down the left wing with real energy and provided a major threat in attack.