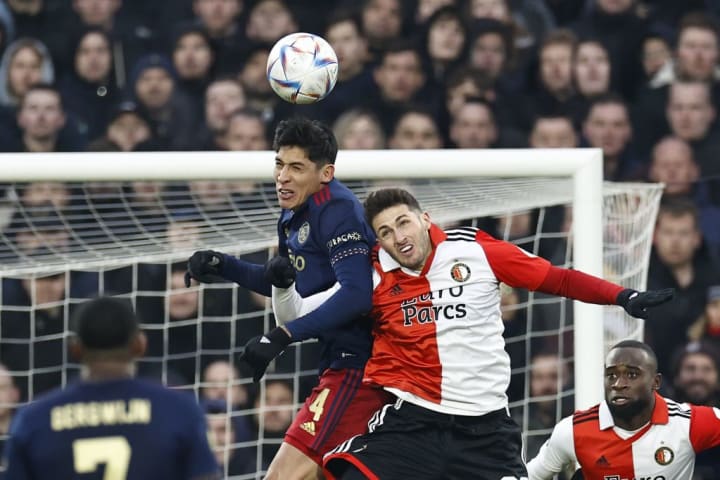 Mexican national team players are back in full force.

But it was the Serie A match between Salernitana and Napoli that made history for Mexicans abroad, as Guillermo Ochoa and Chucky Lozano stood as the first two El Tri players to compete against one another in the Italian league.

Here’s everything you missed…

Battle of the Mexicans in the Eredivisie on Sunday. / ANP/GettyImages

Sanchez and Alvarez kicked off for Ajax, forming an integral part of Alfred Schreuder’s backline, while Gimenez came off the bench in the 74th minute to add to Feyenoord’s attack.

Alvarez served as a center-back this time around, switching it up from his usual central midfield position. The player insisted he feels comfortable in either position, giving Ajax the much-needed flexibility given the limited roster.

Gimenez had a stellar change late in the second half, beating Alvarez inside the box, but ultimately the game ended in a 1-1 draw as goals from Igor Paixão and Davy Klaassen canceled each other out.

The player became a force to be reckoned with against Vitesse, completing 88% of his passes, winning 6/8 aerial duels, and managing one shot on goal. His efforts inspired the 1-0 victory to propel the team to second on the Eredivisie table.

Despite his best efforts, Ochoa conceded two goals but it could’ve easily been four had he not managed two excellent saves in the second half.

Chucky, on the other hand, played a backseat role in the match on the right wing. He managed two shots and a 76% passing accuracy before being subbed off in the 86th minute.

Raul Jimenez is slowly working his way back into…