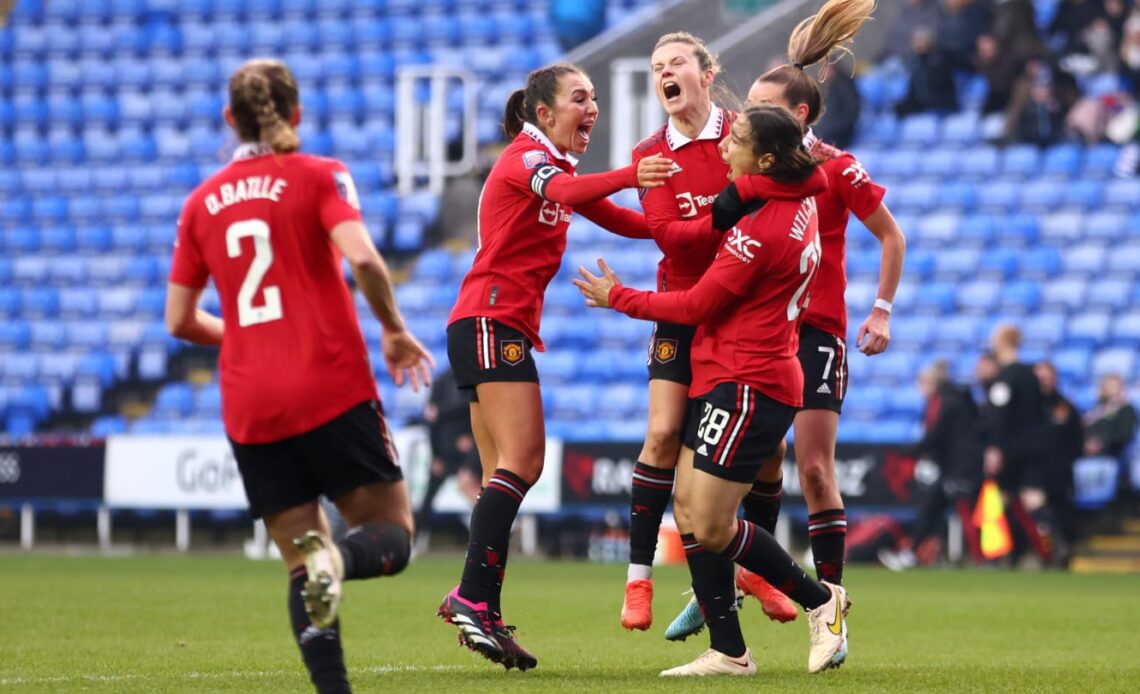 Manchester United moved top of the WSL table thanks to a last gasp win away against a resilient Reading, leapfrogging Chelsea on goal difference after their game against Liverpool was abandoned.

Just as it looked as though Reading would hold out and frustrate United after Katie Zelem had seen a first half penalty saved, substitute Rachel Williams proved to be the hero in the closing stages.

The first real chance of the game went the way of the visitors, who started on the front foot, when the ball ran into the path of Hayley Ladd in the penalty area. But her effort was straight at Jacqueline Burns and gratefully grasped by the Reading goalkeeper.

It was apparent that the Royals had learned from their 4-0 drubbing at the hands of United on the opening weekend of the season and were working extra hard in midfield to close any gaps. Justine Vanhaevermaet even had Mary Earps scrambling with an audacious half volley from out wide, while England’s number one had to be alert to parry an Emma Harries shot at the near post.

United had their own chances to break the deadlock midway though the half, first when Nikita Parris gave Diane Caldwell the slip but miscued her shot from a narrow angle across the goal. Moments later, Lucia Garcia had a pair of decent opportunities, with Burns equal to both.

Burns again proved a nuisance to United in the closing stages of the first half when she excellently saved Zelem’s penalty low to her right. Caldwell had clumsily brought down Alessia Russo. Caldwell made up for it soon after with a last-ditch block to deny Parris a glorious chance that the England winger should have buried. Within seconds of that, she had smacked the bar too.

United started brightly after the restart and Russo was only centimetres away from connecting with Garcia’s cushioned ball across the six-yard box. Reading later had captain Emma Mukandi to thank for deflecting Ella Toone’s low shot wide of the post.

Burns made another top save as the game ticked into the final 25 minutes, diving low to her right to grasp a goal-bound Russo shot.

With United continually running into a brick wall, they needed Earps – hardly busy since the first 20 minutes – to be at her brilliant best at the other end to get fingertips to Vanhaevermaet’s flicked header and stop Reading getting ahead late on.

That proved even more crucial when Williams popped up with the winner only two minutes before the end. The play looked to have broken down on the United left, but the…