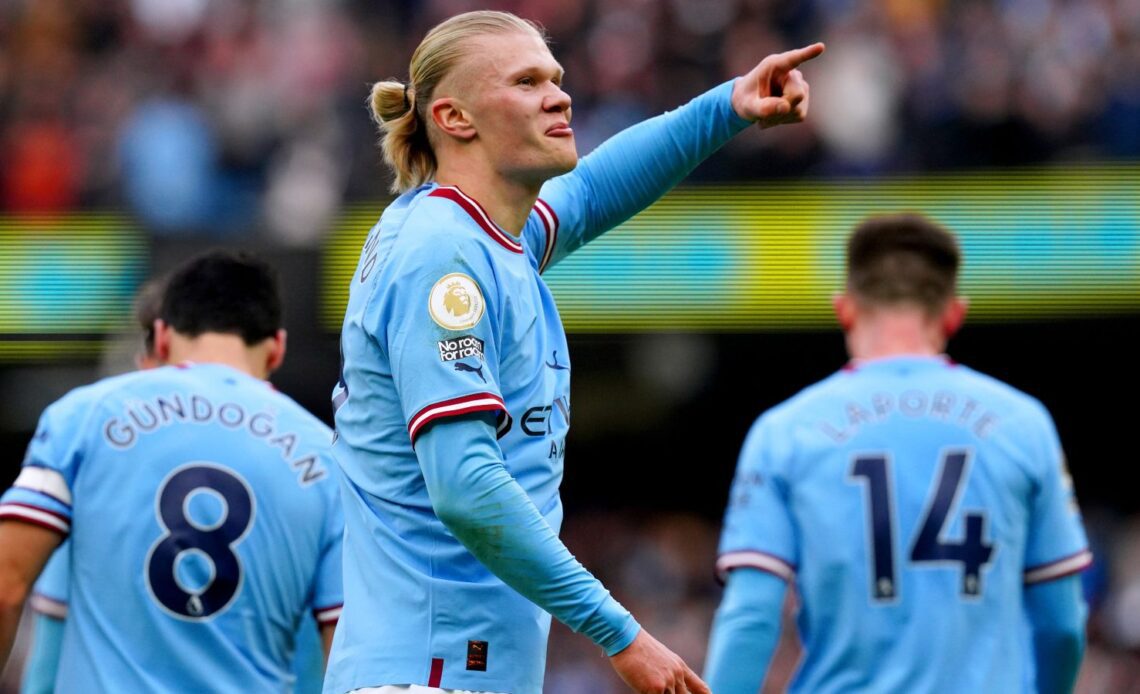 Erling Haaland scored his fourth hat-trick of the 2022/23 season as Man City breezed to all three points against Wolves at the Etihad on Sunday afternoon.

The striker now has 31 goals this season across all competitions and his hat-trick carried Man City to successive league victories for the first time since the World Cup.

Haaland headed the ball home to break the deadlock just before the interval and he doubled their advantage from the penalty spot after 50 minutes.

He claimed a third four minutes later and then, with his job done, left the field just after the hour.

City’s victory, coming after Thursday’s dramatic fightback against Tottenham, kept City firmly in the title picture and further eased concerns about their form after indifferent results earlier in the month.

It took time for City to get into their stride due to Wolves’ rough tactics, but their victory was ultimately a convincing one.

Phil Foden did not appear in City’s matchday squad but Kevin De Bruyne was back in the side after being left out in midweek.

City needed to be patient early on. It was evident, after some grappling in the box twice delayed City’s attempts to take a corner, that Wolves wanted to constrain and frustrate their hosts.

City gradually adapted with Haaland and Jack Grealish both having shots saved by Jose Sa before Rodri fired just over.

Their breakthrough came late in the first half when De Bruyne stood up a cross to the far post and Haaland rose to nod home.

City wanted a penalty soon after when Grealish went down under a challenge from Nathan Collins but referee David Coote and VAR Darren England both spared the Wolves defender.

Collins frustrated Grealish again soon after when he cleared his powerful shot off the line.

City were awarded a spot-kick early in the second half after Gundogan was felled by Ruben Neves and Haaland made no mistake from 12 yards.

Haaland punished Wolves further in the 54th minute. Sa gifted possession straight to Riyad Mahrez, who moments after going close himself when he headed into the side-netting, quickly laid off to the striker.

Haaland could not miss from in front of goal and peeled away to celebrate yet another goal before making way for World Cup-winner Julian Alvarez.