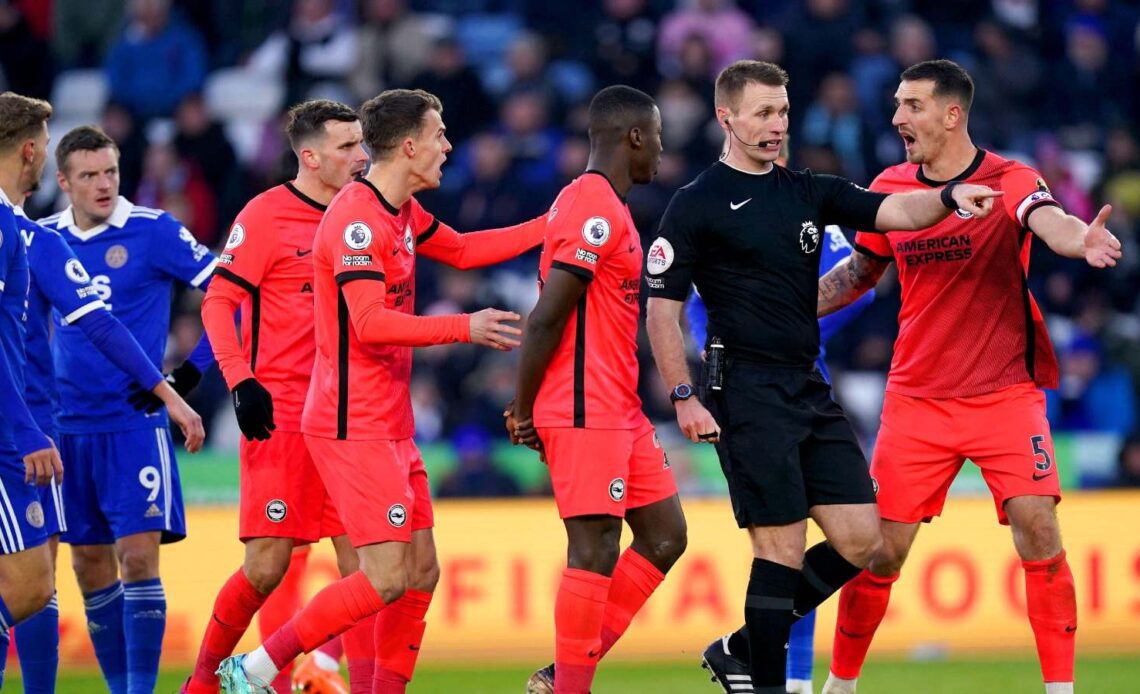 The substitute nodded in to clinch a 2-2 draw and maintain the Seagulls’ assault on the top five.

Harvey Barnes and Marc Albrighton had struck for the hosts to cancel out Kaoru Mitoma’s sensational opener.

It is still the first time the Foxes have earned a point after falling behind this season.

Brighton dominated and were denied a penalty when Danny Welbeck was clipped by Luke Thomas with Solly March wasting a glorious chance just before Barnes’ strike.

The Seagulls missed the chance to move into the Premier League’s top five – but climbed to sixth – while Leicester moved up to 14th in a congested mid-table.

There seemed little for the visitors to worry about from the start and Robert Sanchez and Lewis Dunk combined to usher the ball away from Jamie Vardy, who endured another quiet afternoon.

Boss Brendan Rodgers, somewhat apologetically conceded in the week, time is catching up with his star man who has scored just once in the league this season.

Even after netting 17 times in 33 outings last campaign, there had been little to suggest this term the former England man would be able to roll back the years many more times.

A heavy touch and an early clatter from behind by Pervis Estupinan highlighted the forward is simply just slowing down.

Goalscoring has not necessarily been an issue for the Foxes – their tally of 28 is the best in the bottom half – but they need to find more to continue to disrupt the market as they previously managed.

Even with Brighton’s high-risk slow build-up from the back, the hosts were unable to find the gaps as the Seagulls bossed possession.

Yet it took until the 24th minute for Roberto De Zerbi’s side to create an opening, and even then it came from a corner, when Jan Paul Van Hecke headed Pascal Gross’ delivery over, although Danny Ward’s touch had altered the flight.

Brighton, though, did not have to wait long for an opener which arrived four minutes later.

Neat play from Alexis Mac Allister and Adam Lallana allowed Estupinan to find Mitoma – who wrote a thesis on dribbling at university – on the left.

The Japan international was then given plenty of time to tease Timothy Castagne, cut inside and brilliantly curl the ball into the top corner from 20 yards.

It was a deserved lead but one they only held for nine minutes. The Seagulls had been comfortable, content to knock the ball around at their own…