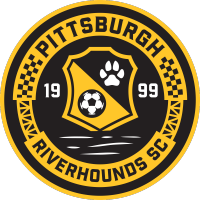 Salem, Va. is probably not the first place someone would pick to have a Riverhounds Academy reunion. But as the site of the NCAA Division III Soccer Championships last month, that’s exactly where a handful of RDA alums crossed paths.

Four former Hounds – Lily Gaston of Johns Hopkins, Maggie Storti and Helina VanBibber of Case Western Reserve, and Ava Wert of Messiah – were battling on the final weekend of the college season, and while Gaston and the Blue Jays of Johns Hopkins who won their first NCAA Championship in 2022, all four players showed how they have progressed from their time with the Hounds to very successful college careers.

All four talked about their experiences – both in the tournament and their time in college so far – and had a lot to share about a memorable season and the Division III soccer lifestyle.

Meeting at the Final Four

Gaston started and played all 90 minutes of the national championship game, which Johns Hopkins won 2-1 on Dec. 4, capping off a freshman year in which she played every game for her new team in an undefeated, 23-0-2 season.

“We set some goals for our season, and one of those goals was to win a national championship, but of course, you take it one game at a time, so it was just: Can we keep winning games the whole way through?” Gaston said.

“The tournament was one of the craziest experiences, just the energy around it and the excitement going into every game. … My role on the team changed throughout the season, my position changed, and I ended up in the starting lineup later in the season, and that’s not how I started, so there was a lot of change. But honestly, the tournament energy was something I’ve never felt before – the energy in every single game from every single player, and it was one of the craziest and best things ever.”

In the way of Gaston’s goal were her fellow former Hounds, first in a semifinal meeting with Messiah and Wert, another freshman who played on the same team with Gaston in the Hounds Academy.

The two friends were reunited as a…