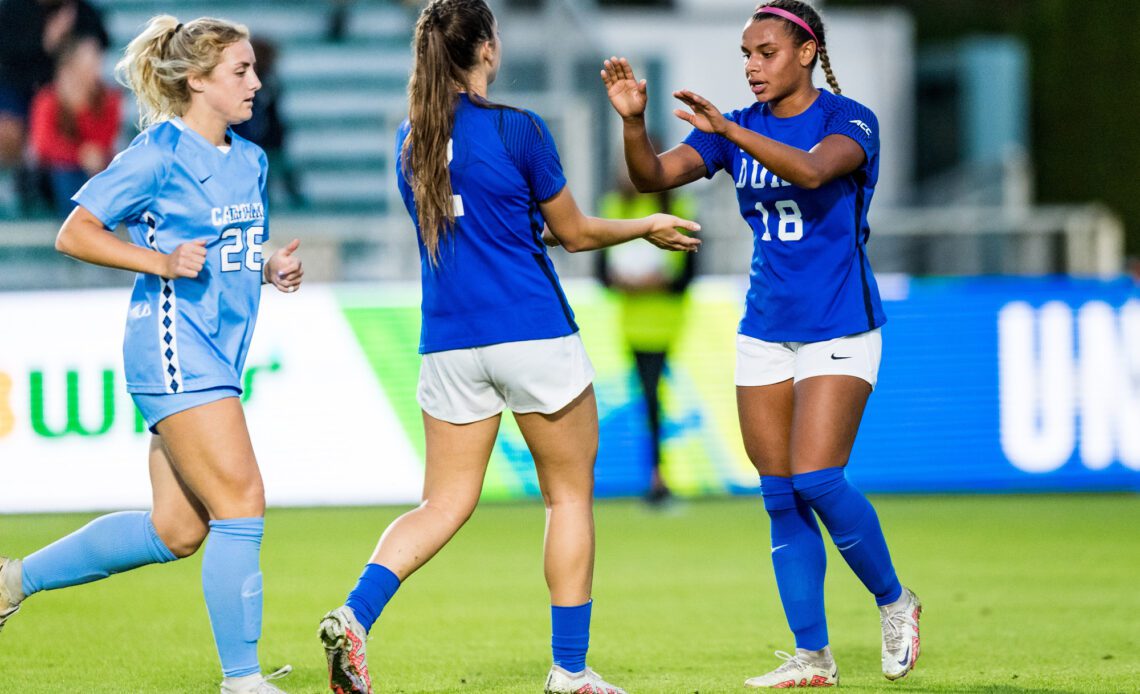 
DURHAM — Freshman Kat Rader made an immediate impact on the Duke women’s soccer program this past year. In just her rookie season, she helped lead the Blue Devils to the quarterfinals of the NCAA Tournament, racking up accolades and setting records along the way.

Rader started 20 matches this season, identifying herself early as one top scorers in the nation. The Blue Devil scored 12 goals, tying the Duke freshman record set by teammate Michelle Cooper in the season prior.

“Holding the record is really exciting, especially that I get to share it with Michelle,” said Rader. “It was awesome being able to play with her this year, so being able to hold that record with her is really special as well.”

Together, Rader and Cooper scored 31 goals, which marked the second-highest scoring tandem in Duke history.

“I think her and Michelle [Cooper] playing together really benefited Kat,” said head coach Robbie Church. “Kat had a stretch towards the middle to the end of the year where she was on fire.”

Of her 12 goals scored on the year, 10 came against ACC opponents or ranked foes when the Blue Devils needed it the most.  She led Duke with five game-winning tallies as well against Radford, Virginia, Wake Forest, Boston College and Tennessee. Rader, a native of Stuart, Fla., collected two multi-goal performances on the season versus Wake Forest and Louisville.

Rader’s scoring made an impact beyond just Duke. She led the ACC freshmen in scoring, and her 29 points led all freshmen nationally.  Her 29 points also ranked tied for second on the Blue Devil freshman record charts, while her 64 shots ranked seventh.

“The one thing that really impresses me with Kat is she doesn’t need a lot of chances to score goals,” said Church. “Sometimes you look up on the box score and Kat has two shots and one goal, three shots and two goals.  Some forwards need five shots to score a goal.  She hits a really good ball – both right and left-footed. She just has that scorer’s mentality.”

Rader’s scoring instinct has also brought her national attention. She was awarded ACC Freshman of the Year – becoming just the fifth Blue Devil to do so.

“It was really exciting … winning individual awards is a lot but I’m just happy about how the team did,” said Rader. “To be able…