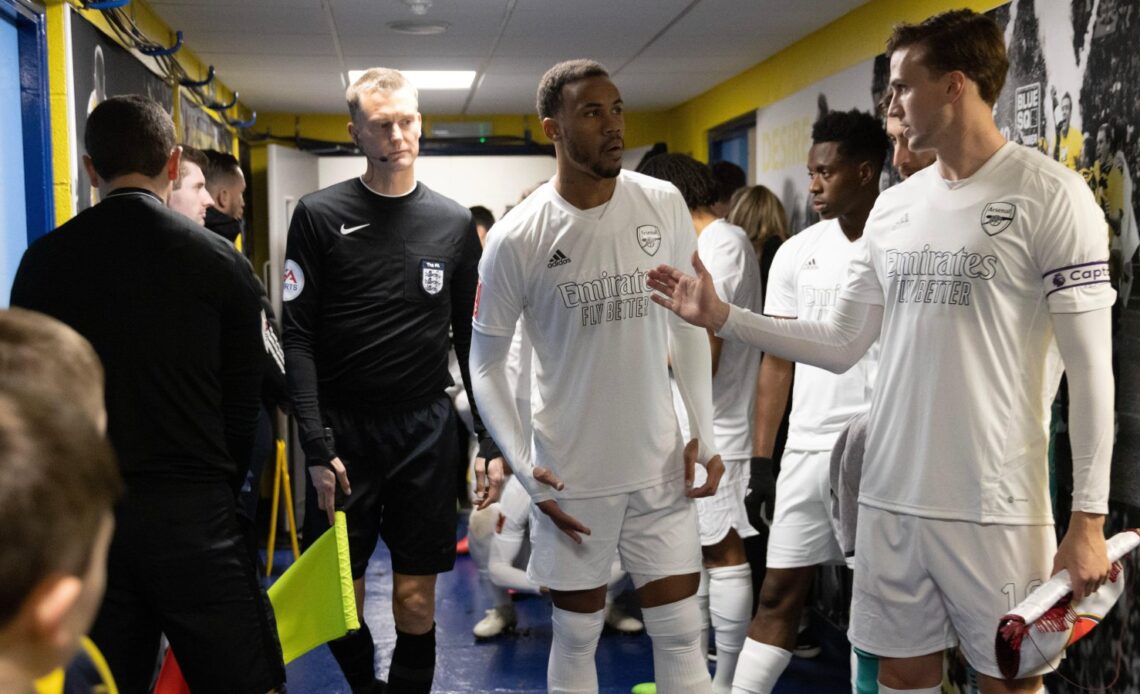 Arsenal defender Gabriel Magalhaes has been picked out as the club’s “weakest link” ahead of this weekend’s game at the Emirates against Man Utd.

The Brazilian signed for the Gunners in 2020 from Ligue 1 side Lille for a fee in the region of £27m.

The 25-year-old has been a key player for Arsenal over the past couple of seasons and he has come into his own this term. He has benefitted from William Saliba’s return to the club as both players have been in superb form.

Gabriel and Saliba have been key to Arsenal’s success as they sit five points clear at the top of the Premier League ahead of this weekend’s fixtures.

Arsenal come up against Man Utd on Sunday afternoon and a win over Erik ten Hag’s side would stand them in great stead heading into the final few months of the season.

United are without summer signing Casemiro as he is banned after receiving yellow cards. Ex-Red Devils player Paul Parker thinks Arsenal are “even bigger favourites” now the midfielder is now involved.

“Arsenal are the favourites regardless of whether Man United were missing Casemiro or not. Everyone knows how important Casemiro is, so it is a massive blow for Man United to not have him for that game,” Parker told Apostagolos.

“I think Erik ten Hag made a huge mistake by not subbing Casemiro off. Everyone knew that he was in danger of receiving that yellow card, so ten Hag really didn’t do himself any favour prior to the Arsenal game.

“Casemiro missing against Arsenal will be the topic of every conversation because everyone knows that no matter what Arsenal now are even bigger favourites because Man United are missing their most important player.”

Parker has also advised his former club that they should look to target Gabriel as apparently he is “making a mistake in every single game”.

“Martin Odegaard is the player that you need to stop if you want to have a chance against Arsenal. He is the best player in the Premier League right now and he must be terrible to face for every opponent,” Parker added.

“I´ve said it before but he is one of my favourite players and the reason why Real Madrid didn’t give him the opportunity to play was because of political reasons. It must have been.

“But I also have to praise Eddie Nketiah for his performances. He has been excellent and has filled the gap after Gabriel Jesus’ injury amazingly well. Man United need to be cautious around him because he can score goals out of nothing.