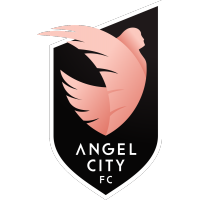 LOS ANGELES – Today, Angel City Football Club (ACFC)announced that the club has traded forward Tyler Lussi to the North Carolina Courage in exchange for veteran defender Merritt Mathias. The club will pick up Mathias’s contract from the Courage, which is an extension through 2023 with an option for 2024.

“Everything excites me about coming to Angel City,” said Mathias. “I have been a part of incredible teams in incredible markets, but something about Angel City is just so different. It is the pinnacle of where we want this sport to be in this country on and off the field. I’m so looking forward to becoming part of the LA family.”

“Angel City is grateful to Tyler for being an integral part of our inaugural season,” said Angel City General Manager Angela Hucles Mangano. “Merritt is an exceptional player, who will bring leadership on and off the field as well as a wealth of professional experience as we head into our second season.”

Mathias comes to ACFC after spending the past four seasons in Cary, NC with the Courage, where in 2018, she was an integral part of a defense that broke the league record for fewest goals conceded, with 17. She helped the Courage win the 2018 Supporter Shield and NWSL Championship- the first time any team had won both in the same season- after scoring three goals in 22 matches, and recording an assist in the championship game. Her performance landed her a spot on the 2018 NWSL Second XI.

Originally signed by the New York Fury in the Women’s Professional Soccer League (WPSL) Elite in 2012, Mathias was drafted as the 22nd overall pick for FC Kansas City during the start of the National Women’s Soccer League (NWSL) in 2013, where she would start in 20 of the 23 regular-season matches her rookie season, scoring two goals. She was later traded to Seattle Reign FC, where she would spend two seasons, including the 2015 season that saw the team win the Shield and reach the championship match.

A native of Birmingham, Alabama, Mathias started her collegiate career at the University of North Carolina, where she played her freshman and sophomore seasons, before transferring to Texas A&M. During her first season with the Aggies, she recorded nine goals in 20 matches, and was named to the All-Big 12 First Team and All-Big 12 Newcomer Team. She later ended her senior season ranked at number 17 nationally in total assists.

Mathias was also a part of the…