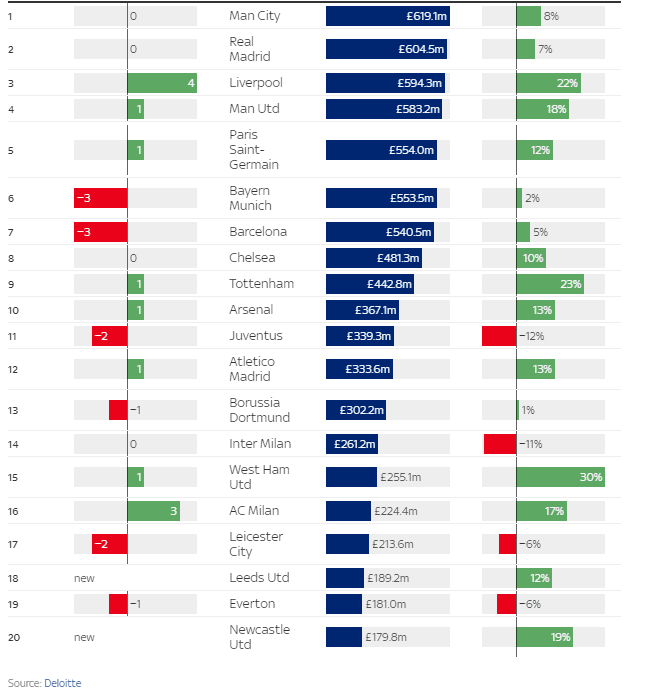 The Deloitte Football Money League for 2023 has been released, with Manchester City unsurprisingly still in 1st place, while Premier League clubs generally dominated the top 20.

Liverpool moved ahead of Manchester United into third place, with Champions League winners Real Madrid the closest behind Man City.

Big names like Chelsea, Paris Saint-Germain and Bayern Munich are also in the top ten, while plenty of English teams got in, such as bigger names like Arsenal and Tottenham, but also the likes of Newcastle, West Ham, Leicester City, Everton and Leeds United.

“The question now is whether other leagues can close the gap, likely by driving the value of future international media rights, or if the Premier League will be virtually untouchable, in revenue terms.

“The Premier League was the only one of the big five European leagues to experience an increase in its media rights value during its most recent rights sale process.

“It continues to appeal to millions of global followers and its member clubs have a greater revenue advantage over international rivals.

“Commercial partner, fan and investor interest in the Premier League appears higher than ever before. While this suggests optimism for further growth, continued calls for greater distribution of the financial wealth of English clubs across the football system and the impact of a cost-of-living crisis makes it all the more important for the game’s stakeholders to keep a clear focus on their responsibility as stewards of leading clubs.”