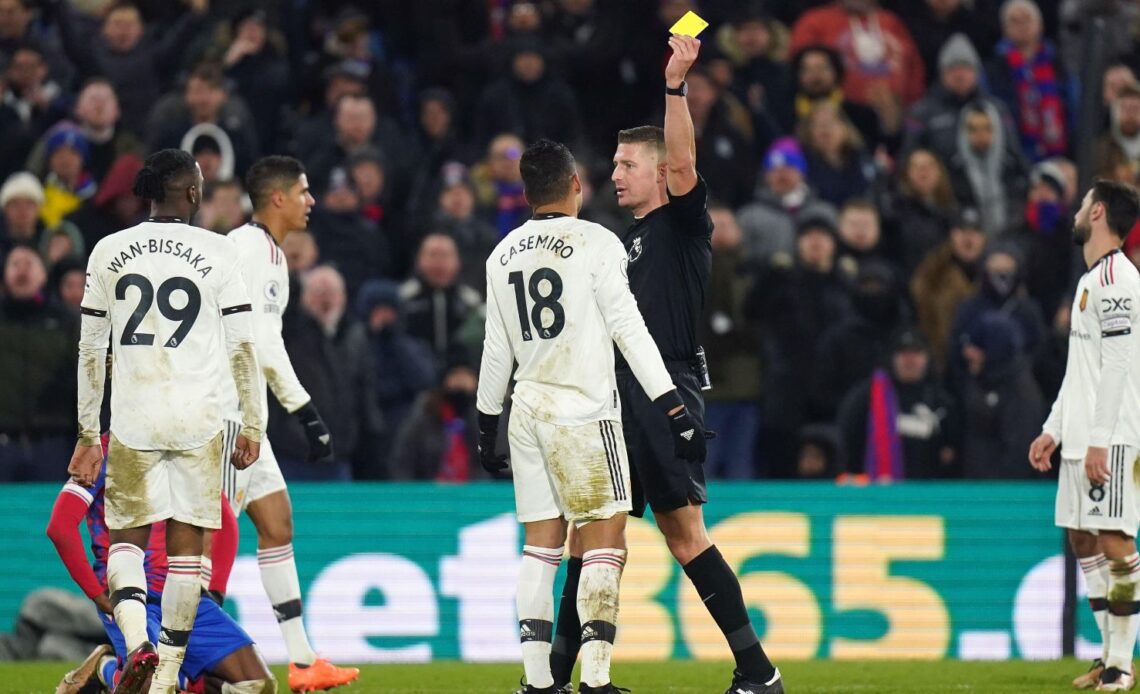 Man Utd midfielder Casemiro was “furious” with Red Devils team-mate Bruno Fernandes during their 1-1 draw against Crystal Palace, according to Jamie Redknapp.

A last-gasp Michael Olise free-kick gave the Eagles a share of the spoils after a first-half Fernandes strike had looked like giving Man Utd all three points.

The draw takes the Red Devils above Newcastle into third place in the Premier League table but victory would’ve moved them second and piled some pressure on leaders Arsenal.

Casemiro picked up a one-match ban during the match with the Brazilian earning his fifth yellow card of the campaign for a tackle on Wilfried Zaha.

That means the Man Utd midfielder – who has been in brilliant form since joining from Real Madrid in the summer – will miss their crucial match against Arsenal on Sunday.

Fernandes was beaten to the ball by Palace defender Tyrick Mitchell in the build-up to Casemiro’s yellow card and Redknapp claims that you could tell the Brazil international was “furious” with his Man Utd team-mate.

“From Manchester United’s point of view, it couldn’t have got any worse,” Redknapp told Sky Sports.

“We spoke before the game about Casemiro, don’t get a yellow card. Don’t get booked, don’t get in any confrontations, he is so important and they need him on Sunday. He gets booked and it is as if it took the sting out of Manchester United, it affected them so much, they knew their talisman and most important player in that defensive role had gone.

“It was a moment of madness, you can see he was furious with his teammate Bruno Fernandes, he jumps out of a challenge and that is how he ends up getting booked. It could have been a red card.

“Mikel Arteta would have been jumping  around his living room, they [United] have got no one who can do like he does in the team.”

Redknapp added: “As a player in that position, all his career he has made those tackles, you get booked sometimes but it is instinct. It is what he has done, he doesn’t know what else to do.

“Of course he doesn’t want to make the challenge because he knows the consequences. But he is furious there with his player. If looks could kill. They just couldn’t get over it.”

Former Crystal Palace striker Glenn Murray continued: “He didn’t need to make the challenge because Varane was covering. You can see the confrontation between him and Fernandes and it was frustration. Frustration over his lack of awareness getting closed down, it…