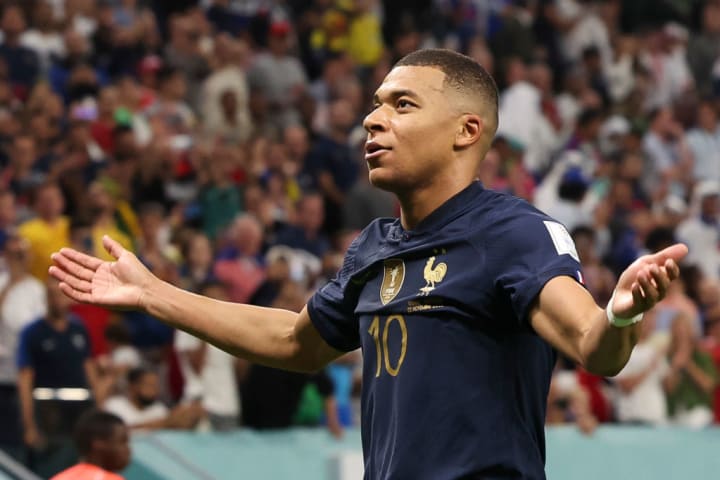 France face Denmark for the second World Cup group stage in a row on Saturday afternoon.

Four-and-a-half years ago, the pair played out a desperately pedestrian 0-0 draw which confirmed both nations would reach the knock-out stage. There are no such certainties hanging over this second-round match, which (hopefully) increases the prospects of a far livelier encounter.

Here’s the lineup Didier Deschamps may deploy in a bid to follow up France’s opening game victory over Australia earlier this week.

Harry Symeou hosts Scott Saunders, Grizz Khan and Jack Gallagher to look back on France ’98 as part of the ‘Our World Cup’ series. We take a trip down memory lane – join us!

If you can’t see the podcast embed, click here to download or listen to the episode in full!

GK: Hugo Lloris – While Germany’s football association are threatening FIFA with legal action over their late decision regarding the banning of One Love armbands, Lloris quickly accepted the decision, reasoning: “When we are in France, when we welcome foreigners, we often want them to follow our rules, to respect our culture, and I will do the same when I go to Qatar, quite simply.”

RB: Benjamin Pavard – The Bayern Munich defender admitted that France took Argentina’s shock defeat to Saudi Arabia as a warning of the potential pitfalls against a lower-ranked nation. There should be little complacency against a Danish side ranked tenth in the world.

CB: Dayot Upamecano – The only blemish on Upamecano’s brief international career (six wins from seven caps) was a defeat to Denmark in September.

CB: Ibrahima Konate – Across numerous years shared at RB Leipzig, France‘s under-21s and now on the biggest stage of all, Konate has spent more than 64 hours on the pitch alongside Upamecano.

LB: Theo Hernandez – In a bittersweet twist of fate for the Hernandez family, the tournament-ending injury to Lucas has opened a space in the team for his brother Theo.

CM: Aurelien Tchouameni – One of several multilingual members of the French squad, Tchouameni’s developed his understanding of English “to understand the meaning of the music I was listening to”.

CM: Adrien Rabiot – For the first time in his international career, Rabiot scored and created a goal in the same game against Australia.

AM: Antoine Griezmann – The heavily-inked racing horse owner made an enlightening link between his two vices. “Horses are like…