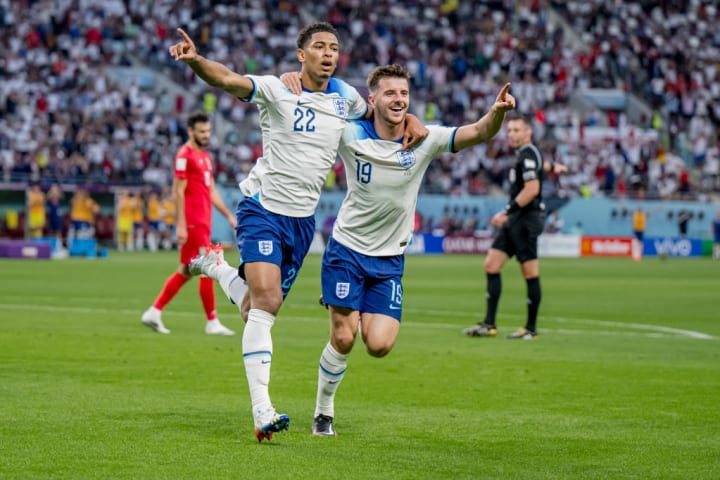 England got their World Cup off to a perfect start as they thumped Iran 6-2 at Khalifa International Stadium.

Gareth Southgate’s men were dominant in the first half as goals from Jude Bellingham, Bukayo Saka and Raheem Sterling sent them cruising, before Saka, Marcus Rashford and Jack Grealish finished off the scoring after the break.

Inside the first few minutes, England were appealing for a penalty as Harry Maguire was cynically dragged to the floor following a corner, but VAR had no interest in getting involved.

After a lengthy first-half delay following a head injury to Iran stopper Alireza Beiranvand, who was somehow allowed to carry on before admitting defeat and leaving the pitch about five seconds later, England had their first real chance of the game as Saka’s cross found Mason Mount on the six-yard line, but the Chelsea man could only find the side netting.

Maguire then hit the bar from a corner, before a header from Bellingham found the back of the net 35 minutes in.

Breathing a sigh of relief, England continued to dominate the game and Saka added a fine second, lashing home a half-volley following a knockdown from Maguire eight minutes later.

Straight from kick-off, it was 3-0 as Sterling tapped home a Harry Kane cross as the Three Lions cantered into the half-time break with a deservedly emphatic lead.

With the game already won, the second half was a little slower, but England did grab their fourth shortly after the hour mark. It was Saka once again as he danced past two defenders and slotted the ball into the back of the net.

The lead was soon back to three, however, as Mehdi Taremi’s smart run led to a thumping finish which smashed off the underside of the bar on the way into Jordan Pickford’s net.

However, any hope of a comeback was quickly extinguished as Rashford, with his first involvement after coming off the bench, mirrored Saka’s strike with a composed finish.

Two more substitutes combined in the dying embers as Callum Wilson unselfishly squared the ball to Grealish, who tapped home into an empty net to round off England’s scoring for the day.

Deep into ten minutes of added time, Pickford pulled off a sublime reaction save to keep out Sardar Azmoun after beating the offside trap, before Iran were awarded a penalty after a VAR check following a dubious shirt pull by John Stones.

Taremi stepped up and tucked it away to add Iran’s second with the final kick of the game.