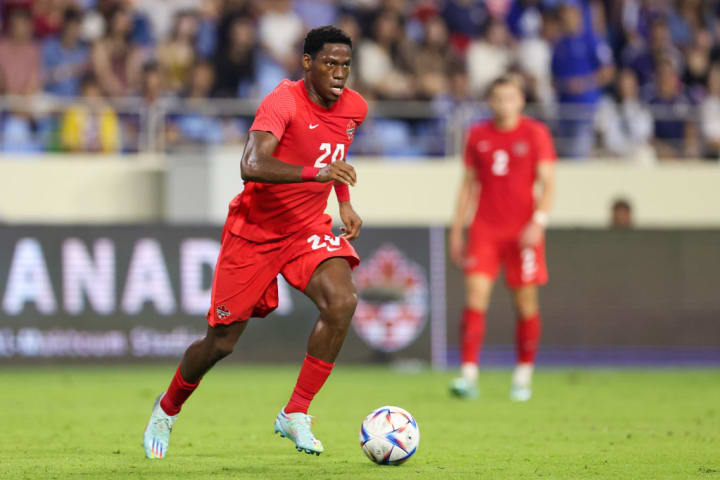 The Canadian Men’s National Team return to the World Cup stage for the first time since 1986 on Wednesday.

John Herdman’s side couldn’t have asked for a more difficult start, facing world No.2 and 2018 semi-finalists Belgium at Al Rayyan Stadium. But despite their underdog status and lack of experience at this stage Les Rouges are certainly equipped to pull off a couple of shocks in Qatar.

Here’s the XI Herdman may deplay as the CanMNT make history for their nation:

GK: Milan Borjan – Herdman suggested Borjan could miss this match with an abdominal issue but is a head coach known for pre-match mind games. Chances are the veteran stopper is fine; if he is, Canada will rely on his experience.

CB: Alistair Johnston – The versatile defender has been excellent in MLS over the past few years with Nashville SC and, now, CF Montreal. Expect him to push forward down the right flank when Canada get the chance to counter.

CB: Steven Vitoria – The 35-year-old centre-back has spent almost a decade playing top-flight football in Poland and Portugal and will be charged with holding the Canadian backline together.

CB: Kamal Miller – After going under the radar for a good while, Miller is now widely recognised as one of the best defenders in MLS. He’ll also carry a threat at the other end from set-pieces.

RWB: Tajon Buchanan – Has adjusted nicely to life in Europe with Genk after breaking through with the New England Revolution. An attacker by trade, Buchanan has more recently been fielded as a wing-back. His knowledge of Belgian football could be important.

CM: Stephen Eustaquio – Like Borjan, Eustaquio is another doubt. However, he trained normally at the weekend so, once again, Herdman may just be keeping Roberto Martinez guessing. If Eustaqiuo is available, the FC Porto man will offer vital quality and composure on the ball through the middle.

CM: Atiba Hutchinson – No Canadian deserves this World Cup appearance more than Atiba Hutchinson, who stands on 98 caps for his country heading into the tournament. The 39-year-old is yet to slow down despite his age and will offer a blend of quality, experience and solidity in midfield.

LWB: Sam Adekugbe – Adekugbe has flourished in Turkish football with Hatayspor over the last couple of years, fully solidifying his spot at left wing-back. Like Buchanan on the opposite side, he’ll be expected to offer an extra body when Canada break.

RW: Alphonso Davies – So much…