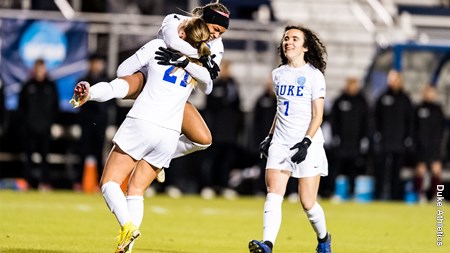 Cooper, a native of Clarkston, Mich., continued her impressive sophomore season with 17 goals, 11 assists and a school-record 45 points.  The Blue Devils improved to 15-4-3 overall, while the Gamecocks concluded their season with a 15-4-5 record.

•    The Blue Devils had a great chance to open the match as freshman Kat Rader stole the ball from a Gamecock defender and had a one-v-one chance against their goalkeeper, but her shot was saved in the first two minutes.

•    Duke broke through at the 11:44 mark as Delaney Graham made a great run down the sideline and crossed a perfect ball into the box where Kat Rader found Michelle Cooper, who half-volleyed a left-footed shot into the top left corner to give Duke a 1-0 advantage.

•    After the first 45 minutes, the Blue Devils featured a 10-1 shot advantage and held 59 percent of the possession.

•    Rader had a couple of excellent chances in the second half, but one went wide and Heather Hinz of South Carolina made a diving stop to her left on the other attempt.

•    Cooper made it 2-0 for the Blue Devils at the 83:16 mark.  Freshman Elle Piper blasted a ball down the left sideline where a Gamecock defender tried to kick the ball back to the goalkeeper, but Cooper beat her to the ball, went around the keeper and finished inside the near post for her sixth brace of the season.

•    South Carolina added a goal in the 89th minute from Payton Patrick as the Gamecocks pressed forward.

•    Duke concluded the match with a 19-9 shot advantage. For the second half, the Blue Devils held a 9-8 lead in shots.