UNC Holds Off BYU to Advance To The Round Of Eight 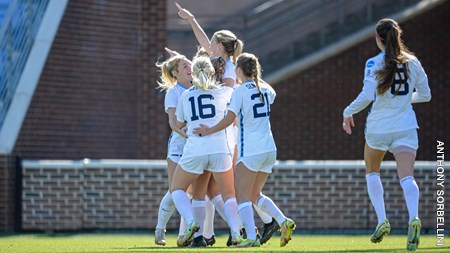 CHAPEL HILL, N.C. – Freshman Maddie Dahlien scored two goals and junior Talia Dellaperuta added another and No. 2 seed North Carolina advanced to the quarterfinals of the 2022 NCAA Division I Women’s Soccer Championship with a 3-2 third round victory over No. 6 seed BYU on Saturday at Dorrance Field.

The Tar Heels (18-4-1) will play the winner of Sunday’s match between No. 1 seed Notre Dame and No. 4 TCU on Thanksgiving weekend at a site to be determined.

North Carolina is making its 16th trip to the quarterfinals since the NCAA expanded the tournament field to 64 teams in 2001.

“They’re a team on a mission,” UNC head coach Anson Dorrance said. “They were able to grind out a win today against a very talented BYU team, so we’re excited where we are.”

Dellaperuta scored in the 13th minute to give UNC the lead, slipping a shot inside the near after taking a pass from Isabel Cox inside the goalie box.

BYU (18-4-1) tied the game in the 19th minute as Olivia Wade raced from midfield, dribbling past numerous UNC defenders and found the back of the net with a right-footed shot inside the box.

The Tar Heels outshot the Cougars 8-6 in the first half, but an onslaught of attempts ensued at the start of the second.

Carolina took the first 10 shots of the second half with Dahlien scoring in the 58th minute to give UNC the lead, gathering the rebound on a shot by junior Avery Patterson and sending the ball into the goal.

“Avery is improving before our eyes,” Dorrance said. “Her decision making is getting better and better. The goals that we scored, and a lot of the attack went right through her. In the old days she would figure out a way to shoot it, but now she is figuring out how to involve her teammates.”

Seven minutes later Patterson connected with Dahlien again to push the Tar Heels out to a 3-1 lead.

Patterson was credited with a career-high three assists to become the first Tar Heel since Julia Ashley against Kansas in 2018 to register a trio of helpers.

“I’ve been working on becoming more sophisticated inside the 18,” Patterson said. “Other times I’ve been too selfish in that aspect, wanting to score and wanting to put the team on my back. It’s about getting the smarter shot off, not the best option for myself.”