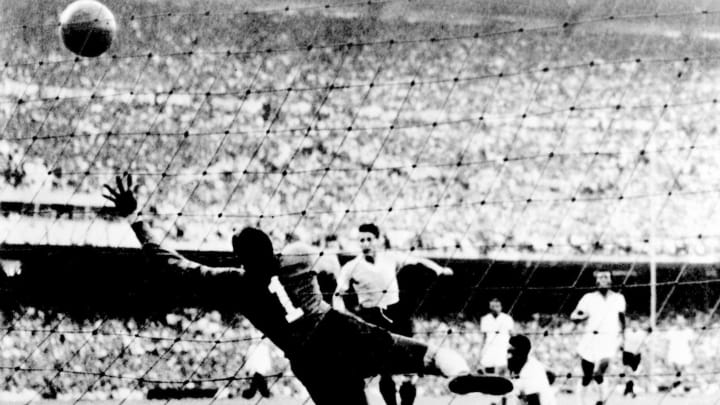 The World Cup is the pinnacle of football and is the highlight of so many players’ careers. A select few ever get a chance to lift the trophy and there can be no prouder moment within the sport.

Uruguay made history in 1930 when they were the host nation of the inaugural tournament. That was the first of two occasions where the South American country has won the tournament and they are one of eight different countries to ever win the World Cup.

Brazil are the official favourites to win the 2022 World Cup in Qatar although a case can be made for multiple teams such as Argentina, Germany, France, England and Spain.

90min have taken a look back and ranked all of the past World Cup winners.

The draw was favourable for Uruguay in 1950 / STAFF/GettyImages

Unfortunately for Uruguay, it cannot be said that they beat the masses to win in 1950. They were put into a two-team group with Bolivia who they beat to reach the second group stage.

They drew with a poor Spain side and needed two late goals to beat Sweden. They did very well to beat Brazil in the final though at the Maracana.

Italy had done well to beat France and Hungary to reach the final in 1938 but they then faced Brazil who seemed to assume they can win without playing a full-strength side.

They rested top goalscorer Leonidas and the Azzurri ended up winning with the lowest goal difference of any World Cup winner (later matched by Italy 1982 and Spain 2010).

The tournament had not exactly taken shape yet / Keystone/GettyImages

It is wonderful to have won the first ever World Cup, but Uruguay were handed an easy group with Peru and Romania. They beat Yugoslavia 6-1 in the semi-final.

They then faced Argentina in a final where the crowd were so involved that the referee only agreed to officiate the game if he had a clear exit plan in place for the full-time whistle. He did not want Uruguay to lose.

The Italians did beat the USA 7-1 in the first round of the tournament in 1934, but apart from that, the Azzurri scraped their way to the final.

Replays, late wins and one-goal margins were the order of the day. It was also said that Benito Mussolini was picking the refs, so there’s that too.

West Germany were humbled by Hungary before getting revenge / -/GettyImages

West Germany’s 1954 side are low on this list because they were beaten 8-3 by Hungary in the group stage, so surely they weren’t one…