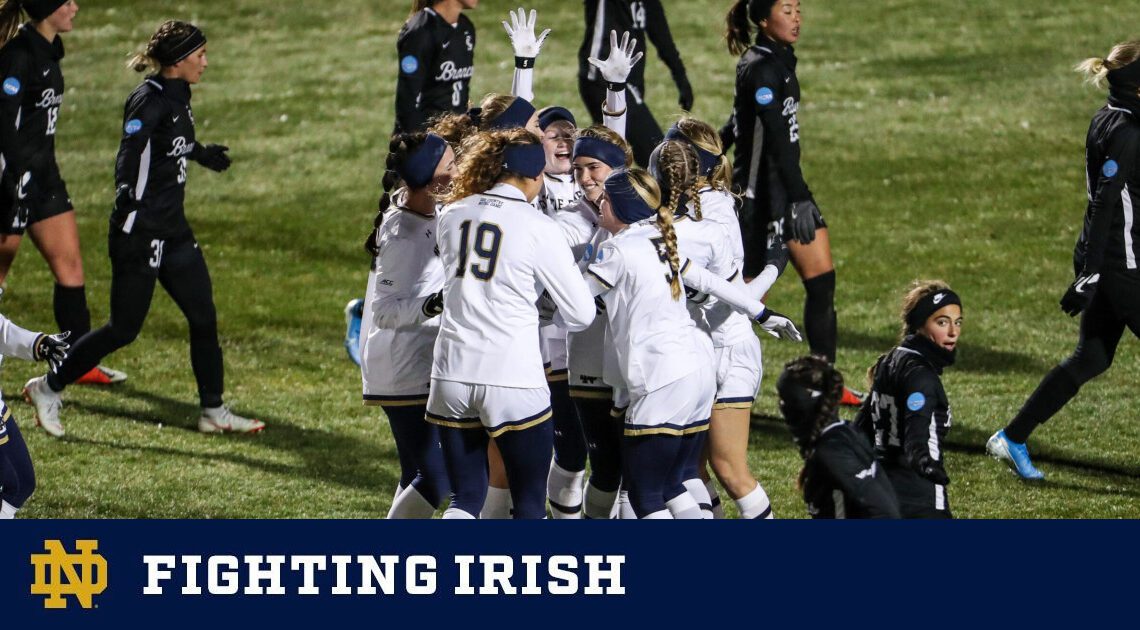 ACC Midfielder of the Year Korbin Albert continued to build her Hermann Trophy resume, recording her fifth multi-goal performance of the season and her fourth in the past six games. She also added an assist for a five-point night.

She now has 14 goals over the last 10 games and 16 total on the season – good for a team and career best 37 points (which puts her in the top-10 in the country). She also now has six game-winnners on the season, which is one off from the nation’s lead.

The other Irish goal scorers were Laney Matriano and Kiki Van Zanten – both in the second half. Matriano notched her first career goal while Van Zanten picked up her seventh of the season.

The game also featured another dominant defensive effort by the Irish backline of Eva Gaetino, Waniya Hudson and Leah Klenke, who garnered their 13th shutout of the season and second this postseason.

Notre Dame dominated possession in the first half and lived in Santa Clara’s half of the field. In fact, the Irish outshot the Broncos 26-0 in the half, with 11 of their shots on frame.

Who had most of those shots – none other than Albert, who fired of 12, including five on goal. Albert was Albert and flashed her dribbling prowess by taking on multiple defenders at the same time, making them fall down and getting her shot off. She also had a bending shot from distance in which the Santa Clara keeper had to make a leeping save for.

Forward Maddie Mercado boasted the second most with six total shots, one on net.

Notre Dame’s relentlessness paid off in the 44th minute when Ashley Zugay was taken out in the box and the Irish were rewarded a penalty kick. Albert stepped up and delivered for the 1-0 halftime lead.

It didn’t take long for Albert to get her goal in the second half, scoring at 47:11. She beat her defender on the right side of the box then delivered near post with her left foot.

Just 34 seconds later, the freshman Laney Matriano earned her first goal in an Irish uniform. With the assist from Gaetino, Matriano dribbled deep into the Bronco half and fired a left-footed shot from just outside the box.

Fast forward to the…