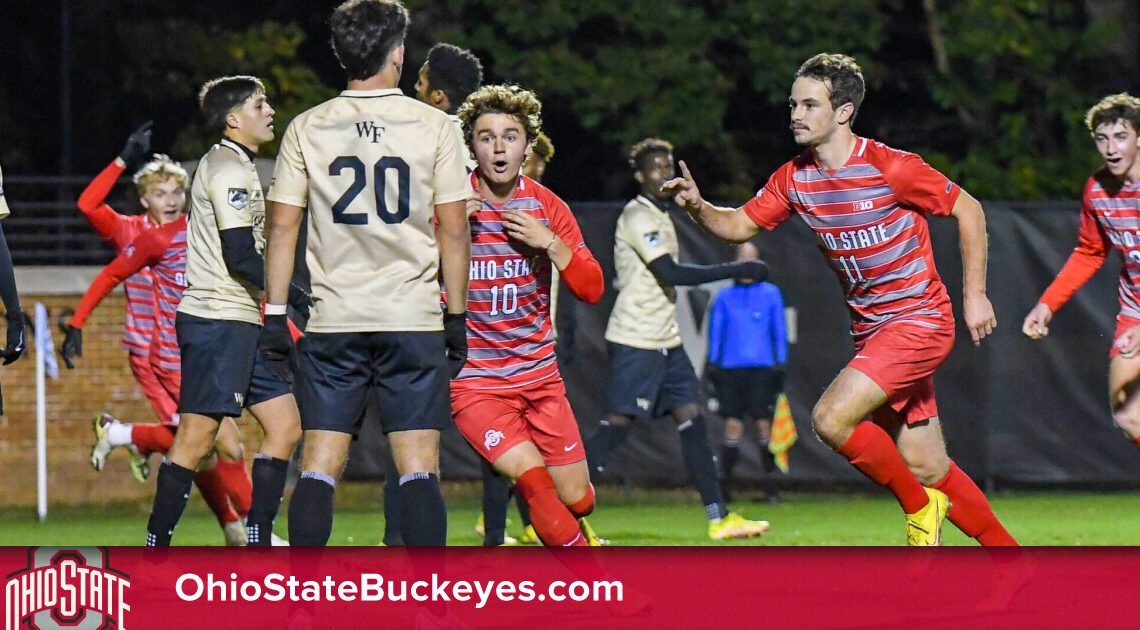 COLUMBUS, Ohio – Ohio State (11-3-5) scored just over a minute into the game and added another 15 minutes later to take a 2-0 lead and then finished off Wake Forest (14-6) with another score in the second half to win 3-0 in the opening round of the NCAA Tournament Thursday in Winston-Salem, North Carolina.

The Buckeyes will remain in North Carolina to face UNC Greensboro, the No. 12 national seed, in the 2022 NCAA Second Round at 6 p.m. Sunday.

Brian Maisonneuve, head coach of the Buckeyes, said the team was eager to get the game started and it showed early.

“You could feel the momentum right way,” Maisonneuve said. “I knew we were prepared but the guys really went out and executed. I think our defensive pressure up the field was the difference in the game.

“We are excited not only for the win but for the way we played for 90 minutes,” Maisonneuve said. “It was a comprehensive effort. In some of our games this year we had gaps where we did not execute but today their effort was there for the full 90.”

After the Buckeyes nearly scored on a header by Nathan Demian less than a minute into the game, the Buckeyes earned a corner kick and converted after an Owen Sullivan shot was blocked. The carom found the foot of Anthony Samways outside the box. Samways drilled a shot through traffic that found the lower left corner of the Demon Deacon goal for the 1-0 Ohio State lead in the 2nd minute.

For Samways, it was his second goal of the year and of his career.

After a Wake foul just outside left of the 18-yard box, Samways started a set piece toward the front of the Wake Forest goal, the ball was headed out by a Demon Deacon defender where Xavier Green connected from outside the 18-yard box before the ball hit the ground and found the right side of the net with a left-footed blast to make it 2-0 Buckeyes in the 16th minute.

Green’s goal was his fifth of the year and 11th-career score.

It was all Ohio State in the opening 45 minutes. The Buckeyes outshot the Demon Deacons 9-2 while putting four shots on net.

Thomas Gilej made it 3-0 Buckeyes in the 53rd when Samways delivered a corner to the front left of the Wake Forest goal box that Gilej, with his back to the goal, headed to the right side for the score.

The goal was the first of Gilej’s…