Ghana’s heartbreak at the hands of Luis Suarez 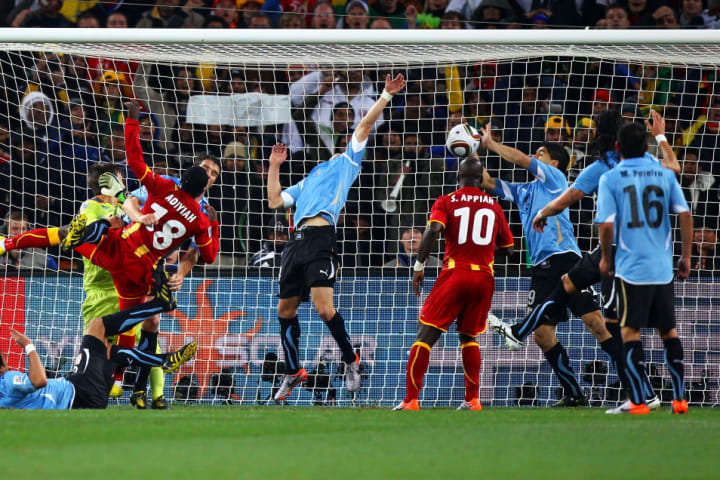 If there was a World Cup an African team looked capable of making a historic semi-final appearance, then it was at the 2010 South Africa tournament with the official song ‘Waka Waka’ (This time for Africa)’ being on constant radio rotation.

Ghana, who were making their second appearance in the tournament, were keen to latch onto the theme of Shakira’s song and become the first African side to reach the last four – having reached the second round in their maiden appearance four years earlier.

Many believed that The Black Stars overachieved at the 2006 World Cup, having made it out of a group containing Italy, Czech Republic and the USA before being knocked out in the round of 16 by Brazil.

The performances put Ghanaian football on the map, and their avenging of the defeat to Brazil three years later in the final of the U20 World Cup solidified them as a force to be reckoned with on the world stage.

Five players from that golden Under-20 squad, including Captain Andre Ayew, were rushed to the senior team and the strategy paid off. The youngsters played key roles in the Stars reaching the quarter-finals of the first ever World Cup on African soil – although Asamoah Gyan, Kevin-Prince Boateng and Sulley Muntari were the real stars of the team.

“Luiz Suarez’s hand denied Adiyiah a certain goal, but gifted Gyan an opportunity to seal his place in African football history with one spot kick. “

Their progress to the last eight was a special moment for Africa because the continent’s four other representatives had been knocked out – providing ammunition for most Africans to show profound solidarity with the Black Stars.

Cameroon and Senegal had previously reached the quarter-finals of the World Cup but none of them got quite as close to the semi-final stage as the Black Stars did. But for the dramatic clash with Uruguay at the FNB Stadium in Johannesburg, this perhaps my most memorable moment of the tournament, the Ghana would’ve progressed further than ever before.

I thought the Black Stars had made history when Muntari handed Ghana the lead, but Diego Forlan’s equaliser dazed me and the Ghanian team, forcing the game into extra time.