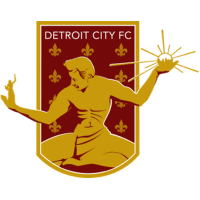 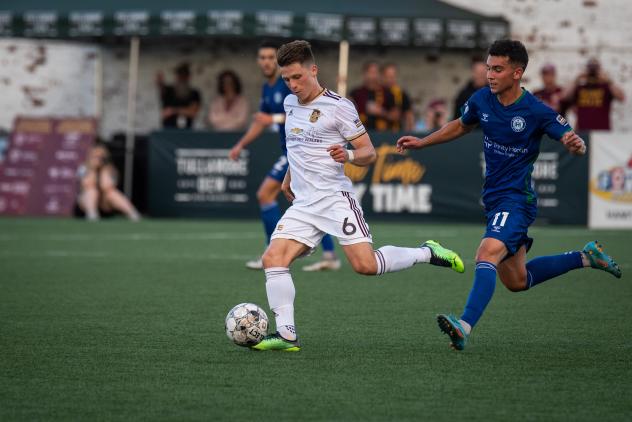 HAMTRAMCK, Michigan – In a contest where both sides battled until the final whistle, Detroit City Football Club and Hartford Athletic shared the points in a 1-1 draw at Keyworth Stadium.

From the opening whistle of the first half, Detroit City (8-6-4) came out flying, applying heavy pressure on the Hartford Athletic (4-4-9) backline.

At the five-minute mark, Detroit’s first opportunity came when forward Antoine Hoppenot beat his defender while carrying the ball from right to left, setting himself up for a shot that just missed to the right of the frame.

The pressure would not stop there. As in the 20th minute, a clever interception from #8 Abdoulaye Diop in the midfield got Le Rouge rolling again as the ball eventually made its way to #20 Deklan Wynne who found #19 Pato Botello Faz in front of the net and he finished his chance to put Le Rouge up for his sixth goal of the season.

In the 39th minute, Detroit suffered a huge loss after captain Stephen Carroll went down with a game-ending injury after he stretched to deflect a crossed ball from the visiting Hartford in front of the net. He immediately dropped to the pitch in pain and was helped off the field. He was replaced by #2 Rhys Williams.

Goalkeeper Nate Steinwascher continued his stellar play between the sticks after making a diving save on Hartford Athletic forward Prince Saydee just six minutes into the match and then came up big once again in extra time in the first half by making a two-handed save at the crossbar off of an elevated shot from midfielder Danny Berrera.

In the second half, Hartford quickly found the equalizer in the 57th minute on a goal from midfielder Andre Lewis who was left unmarked inside of the Le Rouge penalty area and had a clean shot to beat Steinwascher into the bottom left corner. Midfielder Peter-Lee Vassell was down on the pitch surrounded by two City defenders and was still able to make the pass to the waiting Lewis as Detroit City FC failed to clear their lines.

City kept up the pressure and intensity as they just missed the chance to take the lead and surely claim all three points in the 89th minute when Pato Botello Faz found himself in space inside of the area but sent his shot over the crossbar. A huge missed opportunity for Le Rouge.

DCFC ended the game with a total of 20 shots to Hartford’s nine. Both teams…